Today Bunny told me she had a an idea for dinner. She wanted to make chicken with pepperoni and a cream “whip” (sauce). I asked what that was and she told me that she wanted to put the chicken in a pan and add the cream sauce and put pepperoni on it and them top it with cheese. Now I thought about it and realized that it sounds like it might actually be yummy! So since we were off to the store anyway, I helped Bunny pick up the ingredients. She was very excited to make dinner, and since she thought of the recipe herself it was even better! Here is what we did. 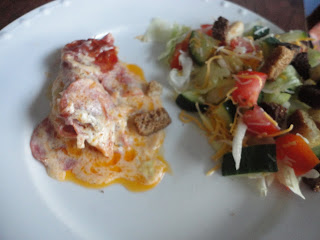 Here is her finished Pizza Chicken 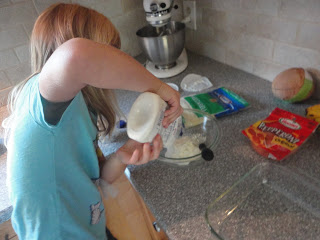 We started off with making the cream sauce 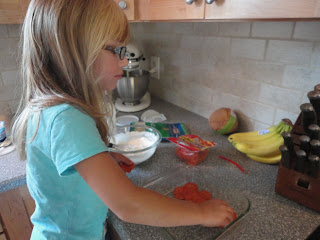 Then lined the pan with pepperoni 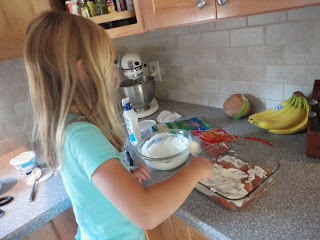 Next we added chicken and put the cream sauce on it. 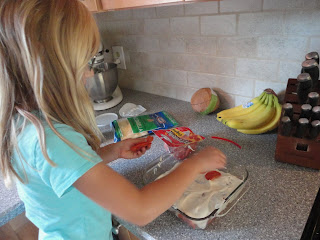 Topped it with more pepperoni and some mozzarella cheese. 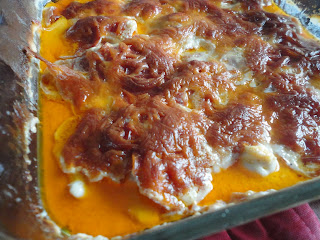 Here it is all baked up. There was a bit of grease from the pepperoni, but I used a slotted spoon to serve it, so no one ate bunches of grease! 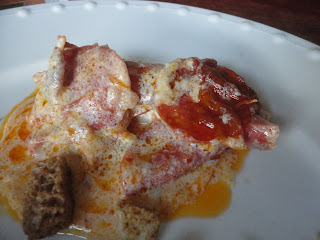 It was actually yummy! I wasnt sure how it would turn out, but the chicken was tender, the sauce wasnt too thick, and everyone liked! It was rather rich and not the healthiest meal. But when Bunny makes up a recipe, I love to try and see how they will turn out (provided it isnt something I know will be not good and use alot of ingredients. I just cant let her do that quite yet! Its a learning process!)
If you want to make this, here is the recipe. I added measurements even though we eye balled everything.
Pizza Chicken
3/4 cup of Sour Cream (softened)
1/4 cup of Ranch Dressing
2 Tablespoons of Cream Cheese
Salt and Pepper to taste
7-8 Chicken Tenders (or 3-4 Breasts)
Pepperoni
Mozzarella Cheese
Mix the first four ingredients in a bowl and set aside. Line 8×8 with pepperoni, and add chicken. Pour cream sauce over chicken, and top it again with pepperoni. Sprinkle cheese on top. Bake at 325 for about 30- 40 minutes until bubbly and chicken is cooked through. If you are using large chicken breasts the time maybe longer! Let it sit for a few minutes before serving to let the sauce thicken up a bit and cool off. We served it with salad on the side! Everyone loved it!
Let us know if you made Bunny’s Pizza Chicken! We would love to hear what you think! Happy Cooking!
﻿
Back to School Party! Montessori Monday~ The God With No Hands!