Today we headed out to the zoo again! This time we were ready to really look at the underwater animals! Bunny, Pup and I have been reading all sorts of books about the ocean and so it was fun to go and see all the things that we had read about! Bunny was really interested in the turtles! We started our adventure with lunch sitting by the cheetahs. While we ate I asked Bunny to tell me what she thought she would like to know about turtles. We talked about it for a bit and came up with a small list of things we wanted to find out. Where turtles vertebrate or invertebrate? What is their classification (reptile, amphibian, bird, fish, mammal, or invertebrate)? What do they eat? Where do they live? What do they do? I was impressed with her list (I did help her a little). She is changing and having questions. It is one thing that I really want to work on this summer with her. To help her rediscover the joy of finding answers and having questions about things. It will take some coaching in the beginning, but I know that she will get it! After finding our research questions, we headed off to the aquarium! It was fun to watch all the fish and talk about the different areas of the ocean! We saw a sea turtle, crab, starfish, coral, sea horses, jellyfish, and a bunch of other amazing sea creatures! The girls loved it! 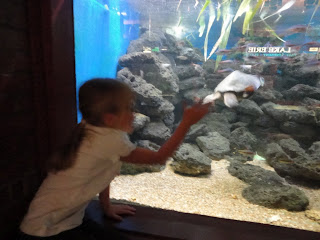 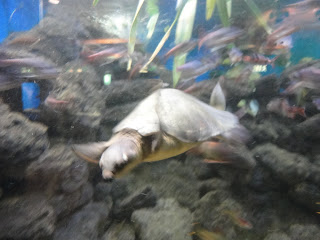 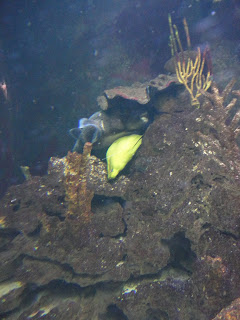 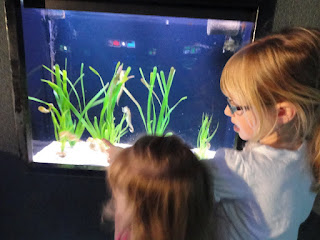 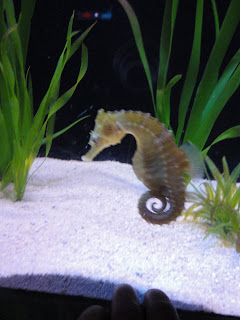 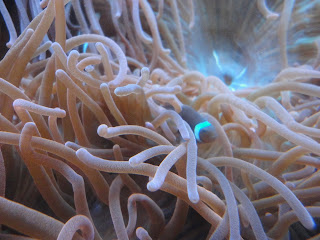 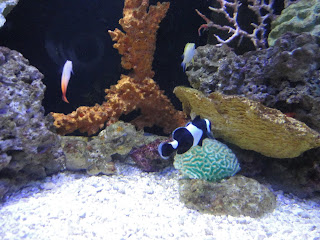 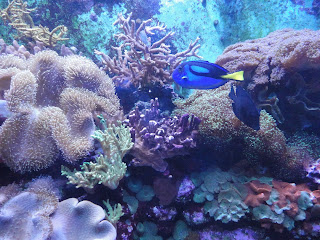 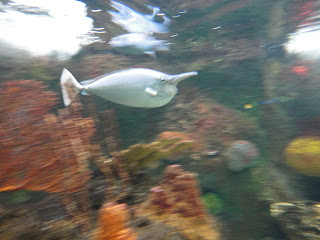 After all of our fun in the aquarium, we headed out to see the amphibians (we decided that turtles were not amphibians) and then we headed to the reptile house. In the reptile house we found turtles! Hooray! We decided that they must be reptiles (and obviously vertebrate). Just to be sure, we asked a zoo keeper and they confirmed out theory about turtles being vertebrates! So we found that out! While we were there we saw the crocodile, and some great snakes. There were some zoo keepers that had snakes, and cockroaches out for the kids to look at and pet (ewwww for me!). Both the girls looked, but they didn’t want to touch the snake, and they did touch the giant cockroach! 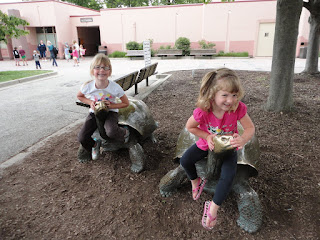 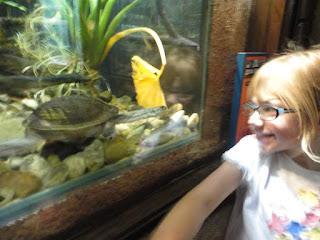 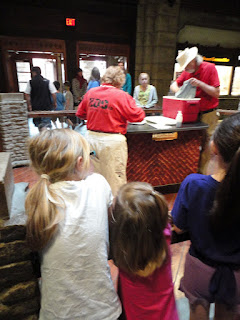 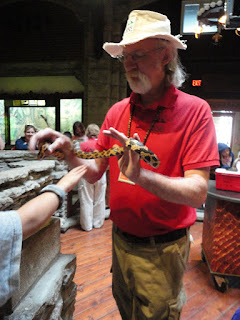 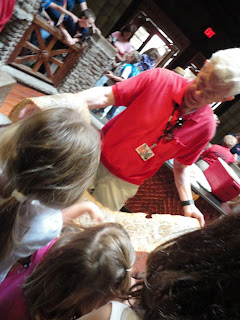 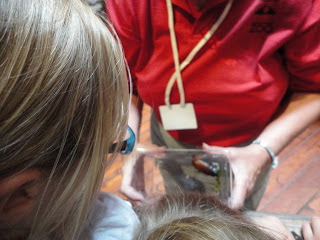 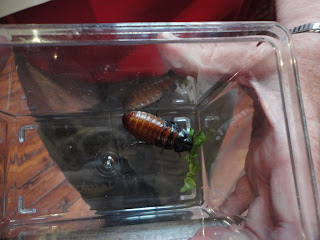 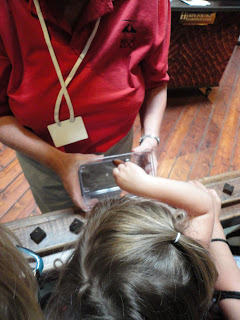 As we headed out of the reptile house, we saw the giant tortoises outside! They are really cool to see (and big enough for the kids to ride)! They were eating , so we stopped to watch them for a while. After that we wandered back to a part of the zoo that we don’t normally see! What we found was a barn with windows that you can see the zoo keepers working with some of the animals that are not on exhibit! It was really fun to watch them pull the animals out and look at them or feed them! Both girls were really fascinated by all this activity and we talked about how there are keepers in all parts of the zoo who do thing for the animals in the background! Pup was really the most interested and I think that with her deep love of animals she will be interested in this for a long time! Bunny liked watching it all too, and we are thinking of signing her up for classes at the zoo.They are only once and month and the kids get to see the animals up close and learn about them! Perfect! I think both kids thought it was great when the zoo keepers who were working stopped and held he animals up to the window so that they could see them! Bunny really loved the hedgehog! I didn’t get any pictures of them, since I didn’t know what they would think of it! So after that we headed even further back and discovered that there was a native turtle exhibit! How perfect is that? All of the turtle native to our area are there and we read about all of them and watched them! It was here that we discovered that some turtles are herbivores, some are carnivores, some are omnivores, and some start out as one and become the other as adults! We also decided that turtles can live almost everywhere in the world with water. And they eat, swim and, sit on logs. We were able to answer all of the questions we had! I did tell Bunny that there was one more question that I had. I wondered what the difference between a tortoise and a turtle was. Bunny said that a tortoise is bigger. I looked it up when I got home and discovered that a turtle lives in or near water, can swim, and lays eggs either under water or on the shore. They also each meat or plants depending. A tortoise however, lives almost entirely on the land. They cant swim and live in difficult terrain. So that is the difference that I found! 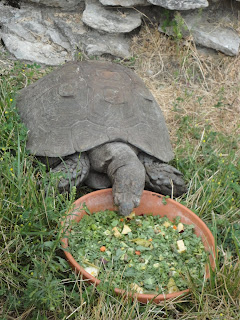 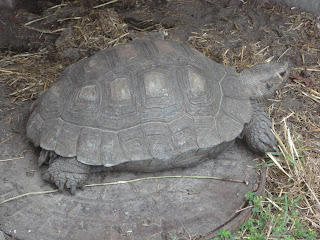 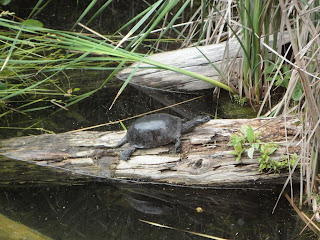 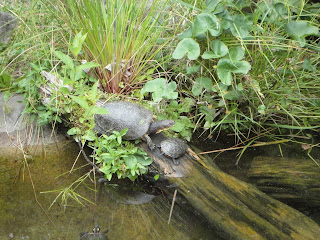 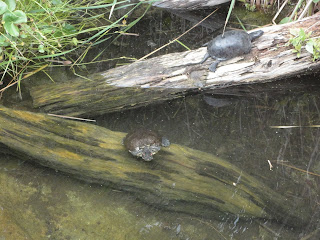 So we had great day exploring our ideas and I think that both girls had fun and learn alot! As you can see, school may be out, but the learning is still going! 🙂 It is my goal to do things like this during the summer! To inspire learning and joy in it is an awesome thing! I hope that your summer is going well and that you are having great learning adventures! Happy Schooling! 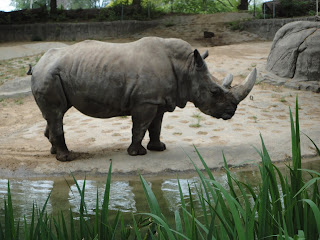 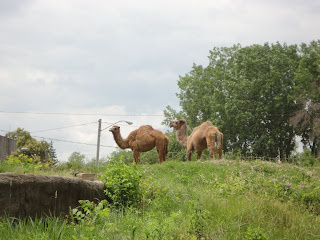 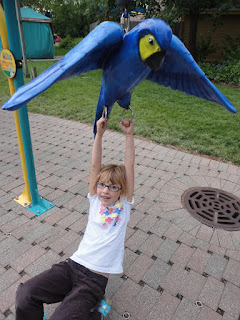 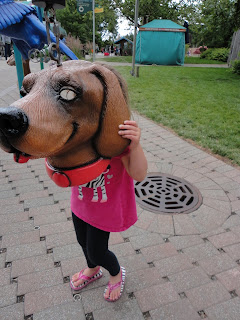 ﻿
AWESOME Giveaway! Vote for my Blog!!!!