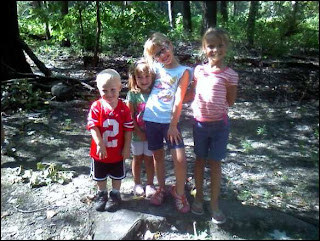 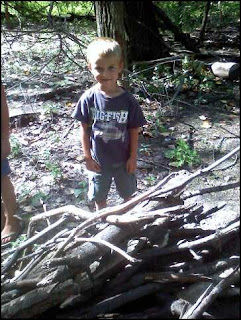 Today we headed out to the park with some friends to spend the morning on the playground! The girls were excitied and to be honest, so was I! 😉 I love having some time with friends to sit and talk while the kids play. We got to the playground and kids ran off to play. After a while though, they found a path in the woods behind the playground that they wanted to explore. So off they went (and so did we)! What they found was huge pile of logs and branches! HM (age 5) started moving them all into a pile. He said he was making a fire! But then a huge log caught his eye! He was climbing on it and having a great time. Before we knew it, all the kids were over there with him! Looking at this log, finding walking sicks, and adding to the “fire”. While they were playing, one of them had the idea to move the log over to the “fire” So all 5 of them tried to move it, but it was too big. So Bunny stood back thinking for a bit. She took a smaller log and stuck it under the end as a lever to life it up. It worked and she was very excited! Her friend CM (age 6) quickly decided that she could lift it up after Bunny got it up in the air! Well it was still too heavy, so they thought that they could try rolling it, but was facing the wrong way. So Bunny came up with the idea to roll it on an angle till it was the other way, then roll it to the “fire”! This almost worked! After that they decided that it was too much work! 🙂 I really thought it was so amazing though to sit and watch them work ideas out together. They were so enthusiastic and so happy to try and work all this out! This is one thing that I really think Bunny will miss not going to a Montessori school. There just isn’t as many opportunities for her to work in a group to learn and I can see how that is important! I am thinking of some more ideas to try and make that happen this year, but we will see! I really think that the ability of kids to find ideas and try them out is just amazing! When left alone, they really can find some creative solutions and even try ancient tools to accomplish they want to!  I really love moments like this. Having a moment to observe the kids is like getting a glimpse into their minds and how they work! This one showed me so much in a few minutes! 🙂 Witnessing moments like this are a blessing that keeps me excited about learning more about how kids learn! 🙂 Happy Schooling!
PS: Sorry about the bad pictures. All I had was my phone and it really doesnt take good pictures. The kids kept saying, “Ms. Stephanie take a picture” and I didnt have my camera! So Sad!