Montessori Monday~ A week of odds and ends!

This week we are pretty much just working on what we have going on in our classroom right now. I couldn’t think of any other trays to make! 🙂 So we are using what we have out and working hard! I forgot to write out Bunny’s Plan, but it looks very much the same as last week. I think we will be looking into the unicorn whale this week a bit since we are on a unicorn kick! 🙂 We also have some math work to do, I need to research a figure out the subtraction snake game, and I really want to work on some letter sounds. I really hope to get in a few good days of work in! Today was a good start. It wasn’t out longest work time, but it was a good one! Bunny did some multiplication today and read a book, Bug focused really well and chose her own work, Pup buttoned a coat all on her own, and Tadpole actually put his work away! It was a pretty good day! 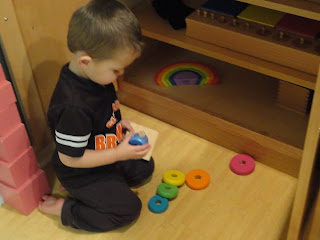 Tadpole picked this work out right away.
AND he finished it!!! It is so rare that he finishes.
I hope that is the beginning of some more work time for him! 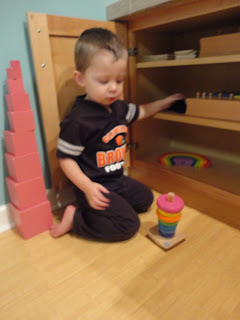 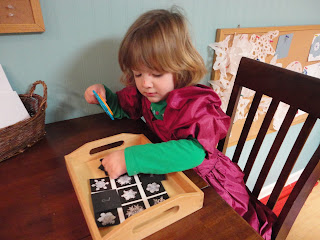 Pup did this work really well! I love that she stuck with it! 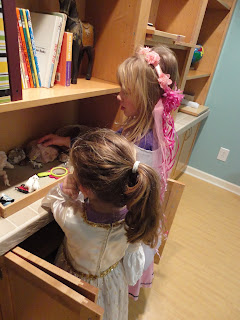 Here the girls were looking for sparkly rocks that look like gem stones! 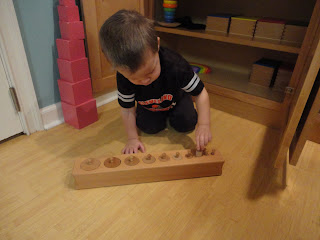 Tadpole worked with this a bit today! 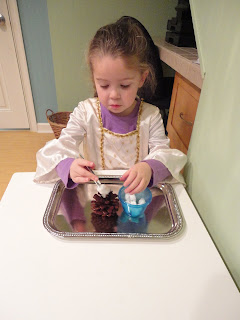 Here is one of Bug’s picks! This was really tricky for her, but she did it and she used the tweezers to put all the puffs back too! 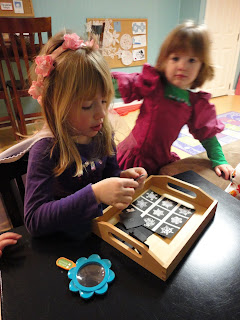 Bunny did this work and was really upset that she didn’t get them all right! I think that she was surprised at how hard it really was! 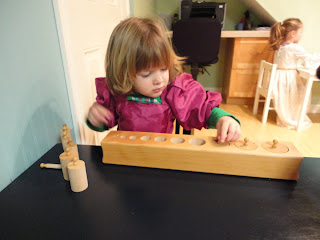 Pup did a great job with the cylinders! 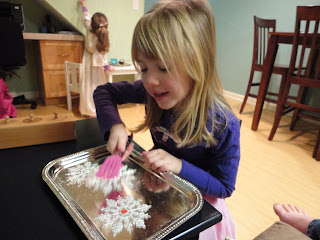 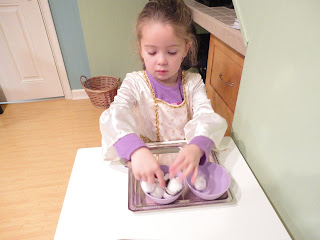 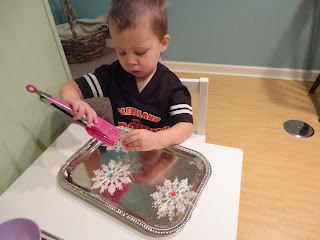 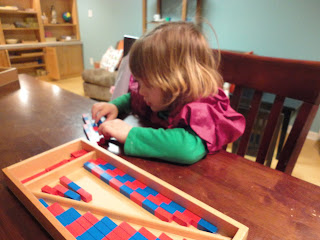 Pup is doing her math. She really doesn’t get it yet, but she really tries!
She is so proud when they are all lined up! 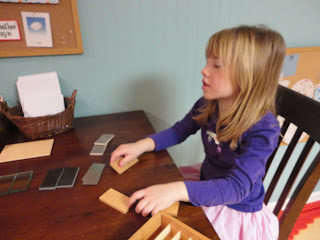 Bunny pulled out the thermic tablets! She really likes these, but I think we both sort of forgot them. Its always fun to find a work that we forgot about! 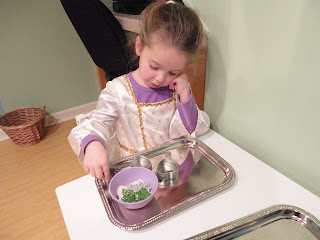 Here is Bug with another work that she picked ! 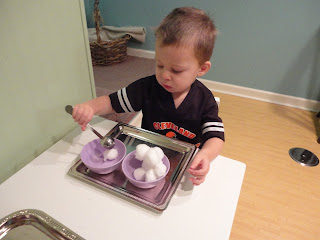 Tadpole also did this work really well! He feels like one of the big kids when he sits at the table and works! 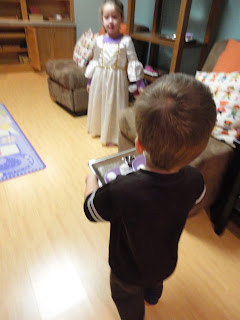 And he is one of the biggest moment of the day….HE WALKED HIS TRAY BACK ON HIS OWN!!!!!!
I know that its a simple thing, but its huge for him! 🙂 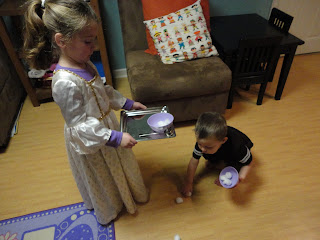 Then…it got better! He spilled and PICKED IT UP!!!!!
I am so excited! He is growing up and I love it! Plus his sister helped him out which was so sweet of her! 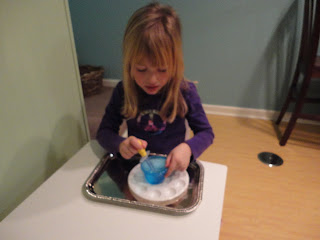 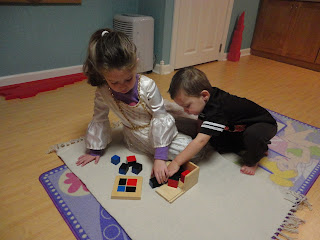 Bug did the binomial cube. She somehow managed to build it in the container, close it all perfectly, but still had some cubes out of place. Hmmmm….I will have to look into it. She was really proud! 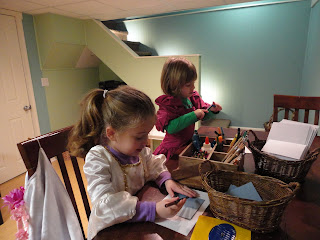 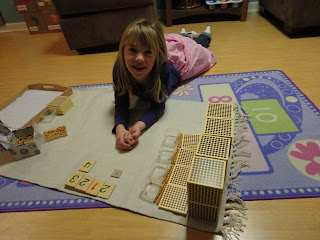 Bunny and I worked with the Golden Bead to do some multiplication work. We have only done static, but this problem offered us a chance to practice some exchange work in this problem! 🙂 oops! I guess I didn’t figure it all right! Oh well, she got it, so I guess she’s ready! 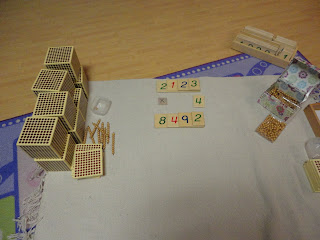 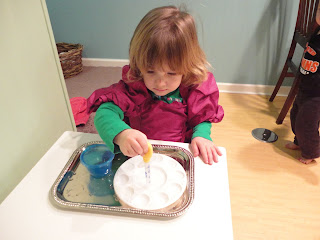 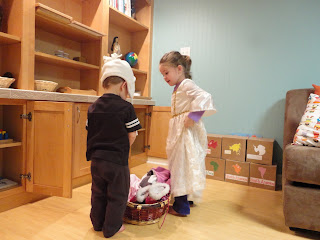 Next I pulled out the dressing basket and the kids thought that was a great idea! 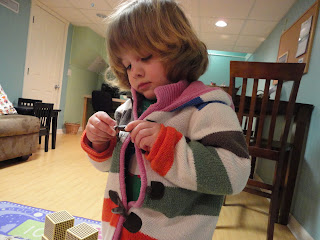 Pup really did a great job buttoning the jacket all on her own!
I was proud that she figured out those buttons! 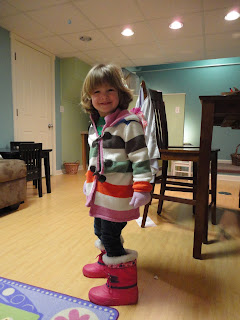 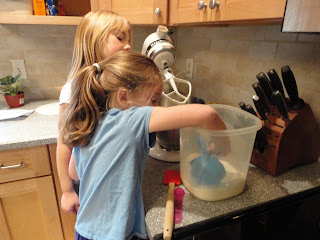 We also baked some cookies together! M&M cookies to be exact! Bug and Bunny LOVES to cook!
So that is what we did today! As you can see from the pictures, we were busy! The girls were in princess mode today too (in case you were wondering about the dresses everyone was wearing), and they really played a TON together today too! I love to see how they creatively work together to create a world of their own! If you want to see more Montessori work though, you can visit Deb at Living Montessori Now for her Montessori Monday link up!
﻿
Learning Directions and….Finally….Snow! Site Using other Blogs Posts