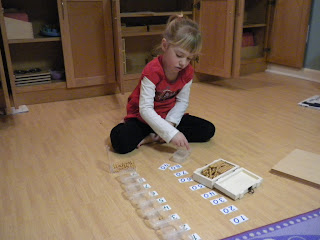 ﻿
So here is post number two for the day! I have so much that I wanted to share and this I really want to remember. Yesterday I went to our local Montessori school for an observation day (well half day). It was the most helpful thing ever! The teachers were so nice and showed me all kids of different presentations for material, and answered a bunch of questions for me! It was so wonderful to be able to sit and watch the inner workings of a true Montessori classroom. It was interesting to see that my insecurities were nothing to worry about. I really thought that having a quite atmosphere meant that the kids didn’t talk much and they room was fairly quite, but within a few minutes I realized that this wasn’t true. While the kids were hard at work, there also groups of kids that were conversation together. It was also interesting to see that, like Bunny, there were a few kids that talked while they worked. There were kids that wandered and seemed unsure of what they wanted to do, there were kids that only wanted to do one thing, there were kids that has some disagreements, and I got to see how all of these situations were handled in a kind, respectful, and fair environment!Since I know that we have so many of these kinds of things that happen here, it was wonderful to see that Bunny is normal, and that there are good ways of handling these situations! I really saw how the teachers stop and take time to make sure that they look into the child eye while they talk, and they expect the child to do the same. “Show me your eyes” was something that I heard a few times. I love this since Bunny has a hard time looking at people while they are talking. This seemed like a good way to help the child remember to look at you while you are speaking to them! This is the best way to teach that kind of grace and courtesy. Another grace and courtesy lesson that I liked and wanted to bring home was body control. Bunny does not like to sit nicely in one place. Apparently it seems like something that alot of 4 and 5year olds have some struggles with this as well. 🙂 So the teachers would offer a gentle reminder to “check your body” to any child that was laying on the floor, or spilling alot of their work, or even sitting facing the work the wrong way to their work. So that is something that we will be introducing into our home. I really think that “check your body” is a lot nicer then saying “Buuunnnyyyy!”

Another thing that I really spent quite a bit of time observing is the Language area. One of the teachers was working on lessons with a bunch of different kids, so it was a great time to see what was going on. I really got to see a bunch of ways that the movable alphabet was being used. One child was using the alphabet with five pictures, and he was spelling words. Another group was working on words that had the letter sound “g”. This was done with alot of hands on with the teacher. She gave them about 5 or 6 letters to work with, then she said a word and helped them sound it out. They, then picked out the letters that they thought made the word. This was a new idea for me on how to use the movable alphabet! After they laid out their 5 words, the teacher wrote them out for the kids on a paper. I did this with Bunny when I got home, and I got a totally different result then I normally do. She did great with this method! Neither one us ended up frustrated. The other thing that I saw that I really liked was the object box. The teacher asked the child to pick out one object and then she would write out a “secret message” (the object word). The child then sounded it out and placed it under the object. The teacher then asked for two objects and then wrote another secret message. The child then sounded out the word and placed it under the correct object. After all the messages were written, the child then stapled it into a book! Finally the other activity that I really thought Bunny would like was a rhyming box. It is full of objects that rhyme. For example: Rake, steak, Sock, rock, Pan, fan, etc. The child then matches the rhymes.
The next thing that I observed was the math area. Seeing all the bead material made me realize why I loved Montessori’s math! Its so hands on and offers a really limitless learning! It is also something that I really didn’t know where to start with it. So the teacher offered to show me some things and it was SO helpful! She showed me how to have Bunny line up the numeral cards 1-9 and 10-90 and then to put the correct unit beads and tens bars beside the numbers. She also showed me how to play the exchange game. It was a different variation on what I had heard of before. The child rolls a dice that has the numbers 10-90 (they don’t use the unites for the game because it takes too long to get to 1000). The number on it is how many tens bars they get. When the the tens column of the board get up to 100 or more, the child get to exchange for a 100’s square! They play until they get to 1000. It was fun, and I think that Bunny will really like to play it! The other thing that I loved in the math section was the math cards they had. They started with simple numbers 1,8,6,10, 4. The child pulls out the correct numeral cards and bead for each number. The next card introduced double digits. 11,17,20,25,52. They did the same thing. The cards worked their way up to large numbers, then they start adding 3 digit numbers by isolating each place value as they go on. Finally they cards have 4 digit numbers that need to be added. This progressive method allows the child to work alone, but it also gives them some really big things to learn! I love it! The teacher also told me about a book that she used that wasn’t really expensive. It was called Math Works: Montessori Math and Developing the Brain. It looks like a great book to add to my shelves!
So these are just some of my observations and learning moments while I was at the Montessori school this week! It was a wonderful experience and I really appreciate the teachers that took the time to show me SO much! They also invited me back as much as I want to so that I can keep absorbing all the amazing things that they do there! If you are still trying to figure out the fine details in your Montessori homeschool, I really encourage you to ask at your local Montessori school (if you have one) to see if you can observe. Most of the time they are more the happy to show you around!