Seasons and the Year

We have jumped back into our Montessori classroom guild (for a while at least). January is all about time. So we start with the seasons, then move into the calender (this program moves at lightening speed, so I only use bits and pieces of it each month, the rest I come up with as I go). They introduce the Celebration of Life ceremony at this point, but I think that I will hold off on that till Bunny’s birthday in a couple of weeks. So anyway here is what we have done the past couple of days.

Seasons﻿
On Monday we talked about the seasons and I was very delighted to find out that Bunny had absorbed some of it without me telling her! So we read a few books in  our circle time about the seasons and then I showed her the four seasons cards that I printed from ﻿http://www.montessoriforeveryone.com/. I told her to match the tree with the correct season name. She cant read so I told her to listen to the beginning sound. She did and she matched them all correctly!!! Yeah! 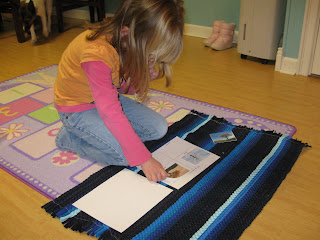 After we made a seasons wheel. First we traced a plate and cut out a circle. Then she wrote the season names on the wheel (I sounded them out for her). Then she stuck season stickers around each word. Finally we cut out an arrow and stuck it in the center with a brad. So now we have a wheel that will point to the correct season! She loved it! (I did laminate the wheel part before I put on the arrow since the stickers weren’t staying well. I went to cut it and I was promptly told that “I can do that MOM”. ). 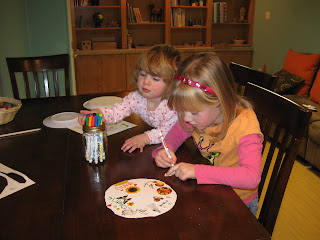 Bunny working on the seasons wheel. Pup wanted to do it too. 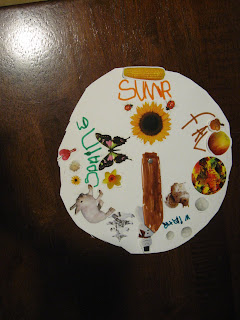 Seasons Wheel﻿
Then we did some seasonal clothes sorting cards:
(they were from http://www.montessoriforeveryone.com/ too) 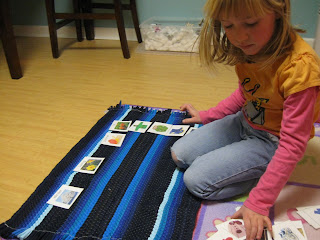 We also played with some of the regular Montessori materials as well! It was a good day!
Months of the Year﻿
Today we moved on to months of the year.﻿ Bunny is trying very hard to understand the concept years, months, days, and minutes. So I thought that this would something that would be good for her to learn. We started our school day with circle time (as always) and we read a few books on the months in a year. She like those quite a bit. Even pup listened to some of them. 🙂 Next I printed out the calender set from http://www.montessoriforeveryone.com/. Its part of their free downloads (They have the best selection of freebies. That’s where you can find all of the things I used in this blog). I printed off on complete set, then I copied the calender part 11 times 🙂 I had Bunny write out the names of each month at the top of a calender page and then write the year on each page too. She is really in a writing sensitive period it seems, cause she did it all and wanted to keep going. So I had her fill in the January calender squares with the right numbers. That started to get a little frustrating for her toward the end, but she was really proud of her work! So was I! I figured we can do the other months as we go! 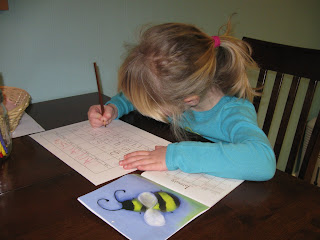 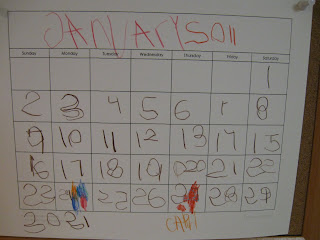 Finished January Calender﻿
I also found a months of the year work that requires her to put the months in the right order. We did it once, but it is still a little hard since we are still learning their order and she cant read. It does have a control chart thought, so she can practice. 🙂 I printed that out at (you guessed it!) http://www.montessoriforeveryone.com/
So that is our update for now! 🙂 The snow is starting to fly again here (we are supposed to get 3-5 in. today) so be prepared for more winter posts!
Space Giveaway! Shoveling and Scooping!