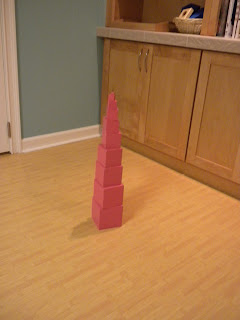 Well I have been reading The Montessori Method by Maria Montessori, and while it is heavy reading, it has been very enlightening! I am only a few chapters in, but I wanted to write a little post about some of the things I have learned so far, so I don’t forget! 🙂 The first thing I realized was how very dedicated Dr. Montessori was to learning and to science. I love how she compared a teacher’s dedication to observation to that of a scientist who will sit and observe a wild animal in nature. They have to get there early, and be perfectly still, watching and not doing anything that will scare or change what the animal’s natural response to stimulus is. I really don’t know if I have that level of dedication to making sure that I observe my kids for real.  More often I am telling them what to do. It is just so easy to really tell them instead of letting go and watching them to see what they need. So I know that I need to really work, not only on preparing the environment, but also watching them. It really is a key cornerstone of the Montessori Method.
Another thing that really hit me was that she worked with the poorest of the poor. These kids were like the ones you see today that you know are from a rough area. They are mean to people, then use bad language, they aren’t clean, their parents don’t give a crap and neither do they. They seem like problem kids and hopeless to work with. These were the kids from the first Children’s House. These were the kids that Dr. Montessori saw the potential in, and she was right! They became an inspiration to the world! One of the things this meant for me was that with patience and love any kid can really become that loving, caring, and courteous child. Any child can really learn and absorb so much! This is encouraging! It means my kids do have the potential to really become the people I dream they can be. But it also really means that I need to make sure that I have the passion and the dedication to really show them how to be these people. I need to be kind, and loving. I should not yell at them, or spank them, or let the house get dirty. I need to be the example! Its hard, but worth it!
Finally, (for now at least) I read the chapter about discipline. Discipline, as Montessori describes it, is the ability to control yourself in any situation. That is what she sought to teach the children in her houses. I really believe in this with all my heart! I want to have my kids be able to control themselves and act properly in any situation that they are ever in. I have always liked this aspect of the Montessori Method, but I have heard so many different ways that teachers use to teach right from wrong using this method. Many of them didn’t seem to work in a home environment. I have always used a time out method to help my kids think about and see what they did wrong. I started to think that this was wrong, so I tried to just talk to them instead. But this just lead to lot of yelling on my part, and alot of attitude on theirs. This has been making our home so uncomfortable. Then I read what Montessori had to say and I felt so much better! She says that the evil tendencies should always be quashed immediately. That the children should know that there are some behaviors that are never allowed, and this should be very clear! She was very firm about this, and she gave an example of some teaches who let the kids go to the point where they were getting violent with each other. This made me realize that this was what has been happening here. my kids were starting to yell and push each other. They began pulling hair, and grabbing things away. I need to make sure that they know that there are things they CAN NOT do. The best way for me to do this without loosing my mind, is to kindly place them in time out when they have done something wrong. This way I don’t yell, hit, or scream, and I am able to talk nicely to help them see what they are doing that is wrong. This was very freeing to me! I am able to parent without harming their development or hindering their independence.
So, once again I will say that Maria Montessori is a very intelligent and wonderful person. If you have the time you should try to pick up her books and read them! I will let you know my other thoughts as I continue to read!

What books have you read that were helpful to you?﻿
Our Montessori Day! Montessori Children

Leave a Reply to Stephanie Cancel