I just have to post about this! I was watching my little brothers this weekend, and I thought that I would recreat our water play to entertain them! I thought that I would make it less “montessori” and more splashy. Well…..much to my amazment they decided that the Montessori type work was more fun! In fact a few minutes after playing in our toy room, they all moved themselves down to our school room and before I knew it, everyone was doing metal insets, cylinder blocks, and everything else! 🙂 I guess it really is more attractive to kids then toys! So while they were learning, I set up the water play in the kitchen! They were super excited about it!!!! It was a lot of fun, wet, but fun! Toward the end of the water play time, Bunny and my brother wanted to wash dishes. I figured that there were so many things to wash after some of the other work was done, that I would take advantage of their enthusiasm by letting wash the “real” stuff! They were so excited that they got right to work. One washed, one rinsed, then they switched ( I think that they washed dishes a few times). After a few minutes I heard this commet from from my brother:

“Wow this is HARD work, but it is GOOD work!” 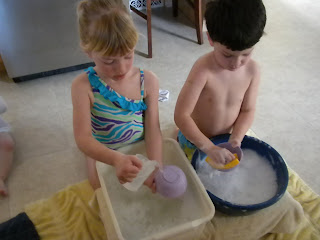 I laughed so hard, then I realized that there was never a more Montessori statement made! 🙂 Work really is SO important to a child. It really does mean a lot to them. In fact while Bunny and my brother were washing dishes, my other brother took the shells that I gave Pup to play with in the water, and scrubbed them for about a half hour. He even wanted MORE! 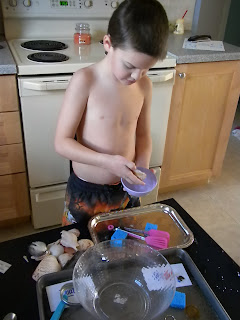 I couldnt believe it! They CHOSE to work, not play! Wow! Has anyone else expirienced this with their kids?